Sacramento, CA…Governor’s climate leadership includes moving to phase out oil production no later than 2045, reducing demand for oil by ending the sale of new gas cars by 2035, investing over $15 billion in climate action and bolstering the state’s green economy. 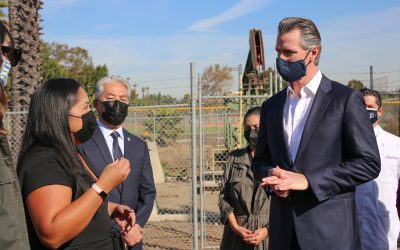 Moving to protect communities as the state works to phase out fossil fuels, Governor Gavin Newsom today announced that the Department of Conservation’s Geologic Energy Management Division (CalGEM) has released a proposed regulation that would prohibit new wells and facilities within a 3,200-foot exclusion area – or setback – from homes, schools, hospitals, nursing homes and other sensitive locations. It would also require pollution controls for existing wells and facilities within the same 3,200-foot setback area.

“Our reliance on fossil fuels has resulted in more kids getting asthma, more children born with birth defects, and more communities exposed to toxic, dangerous chemicals. California is taking a significant step to protect the more than two million residents who live within a half-mile of oil drilling sites, many in low-income and communities of color,” said Governor Newsom. “We are committed to protecting public health, the economy and our environment as we transition to a greener future that reckons with the realities of the climate crisis we’re all facing.”

The state is proposing a 3,200-foot setback in order to protect public health. A 15-member public health expert panel selected by University of California, Berkeley and Physicians, Scientists, and Engineers (PSE) for Healthy Energy helped inform the draft rule announced today. The panel concluded that when oil and gas developments are within 3,200 feet, there is a strong connection to higher rates of adverse birth outcomes, respiratory diseases such as asthma, and heart disease, among other health impacts. The panel’s research supports both moving oil production farther away from communities in combination with pollution controls for operating wells.

“I applaud the Newsom Administration for putting Californians’ health and safety first,” said Dr. Cedric “Jamie” Rutland, National Spokesperson for the American Lung Association. “The data is disturbing: oil drilling near communities is harmful to public health, with vulnerable communities getting hit hardest. Living next to oil and gas production leads to respiratory illnesses, especially asthma as well as low birth weights, adverse birth outcomes and more, widening the healthcare disparity gap. By moving to end harmful oil drilling near communities, California is prioritizing those most impacted by harmful pollution while working to support communities in the clean energy transition.”

In 2019, the Governor directed CalGEM to strengthen health and safety protections for communities near oil and gas facilities as part of its updated mission to protect public health, safety and the environment. During a pre-rulemaking engagement process, CalGEM held 10 public meetings, received more than 40,000 public comments to help inform the draft rule and convened a 15-member panel of public health experts and scientists. The panel reviewed epidemiological studies relevant to oil and gas production and completed the initial phase of its work on October 1.

Governor Newsom has made California a national leader on efforts to phase out the use of fossil fuels, fight the climate crisis, protect our environment and support the health of every Californian. The Governor took bold action to end the issuance of new fracking permits by 2024, move the state toward phasing out oil extraction by 2045 and reduce demand for oil by ending the sale of new gas-powered cars by 2035. Under the Governor’s leadership, for the first time in state history, the number of permits to permanently and safely close wells far exceeds the number of permits for new wells in existing oil fields.

California is home to more than 485,000 clean energy jobs and the state’s renewable energy industry leads the nation in growth. Oil production has been on the decline in California, dropping 65.2 percent since its peak in 1985, and the state is on track to meet its ambitious 2030 climate goal, which will result in a 45 percent reduction in demand for transportation fuels. The Governor’s historic $15 billion climate package includes a $3.9 billion investment to advance the state’s Zero-Emission Vehicle goals, which will help clean up air pollution in disadvantaged communities.

“Today, California took a critical step forward for public health and the safety of our families and children,” said Darryl Molina Sarmiento, Executive Director of Communities for a Better Environment. “By creating a framework to end harmful oil drilling near communities, California is prioritizing front-line residents most impacted by harmful pollution while working towards a healthy equitable transition. We will continue to engage with the Governor’s Office in the next few months to secure a final health and safety setback regulation at CalGEM that offers strong protections for front-line neighborhoods impacted by oil drilling. The fight isn’t over. We need drilling operations phased out in our communities, with robust plans put in place to protect workers and communities.”

“We thank all the partners we worked closely with to develop these proposed regulations to safeguard the health of communities across California,” said State Oil and Gas Supervisor Uduak-Joe Ntuk. “To develop this detailed set of rules, we collaborated with a range of state agencies and an independent public health expert panel to ensure a thorough analysis of relevant science and engineering practices.”

CalGEM will now accept public comment on the draft rule for 60 days. Once that is completed, CalGEM will begin a comprehensive, in-depth economic analysis of the rule. Following this analysis, CalGEM will submit the proposed rule to the Office of Administrative Law and will begin an additional process of receiving comments and refinement of the proposal as needed.

To read the full details of the proposed rule, visit the Public Health Rulemaking webpage. Public comments can be submitted via email to CalGEMRegulations@conservation.ca.gov or by mailing comments to 801 K Street, Sacramento, California (ATTN: Public Health Regulations) by December 21, 2021.

A memo from the public health expert panel can be found here.