Angels Camp, CA…General James B. Hecker was promoted to Four-Star General of the Us. Air Force on June 27, 2022. As a Bret Harte graduate, General Hecker is evidence that great things can come from small places. After graduating with a Bachelor of Science from the U.S. Air Force Academy in Colorado Springs, CO, Hecker continued with a decorated career in the U.S. Airforce. 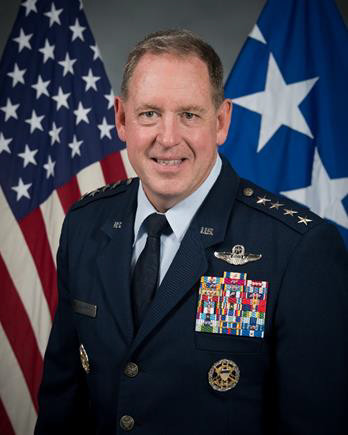 Starting as Second Lieutenant, Hecker rose up the ranks to First Lieutenant in 1991 and then Major in 1999. By 2002 he was promoted to Lieutenant Colonel and then Colonel in 2007. By 2013 he became Brigadier General, Major General in 2016, Lieutenant General in 2019 and before his most recent career advancement as General.

In an interview with Gen. Hecker credits his accomplishments in the U.S. Airforce to “core values and discipline that I received from my parents, school teachers, and coaches during the younger stages of my life.”
When asked what Gen. Hecker remembers about his time growing up in Calaveras County, he stated, “I remember the small-town atmosphere and the friendliness of the community.” Gen. Hecker also added that “growing up in a small community was very influential early in my life. Seeing how everyone cared for each other in that community stayed with me.”

Gen. Hecker still has connections to Calaveras County. “I still have friends from high school and I still keep in touch with (those) that still live there, I recently returned to be inducted into the ‘Athletic Hall of Fame’”, he added.

When asked what advice Gen. Hecker would give to today’s high school students, he replied, “pursue your dreams and don’t let anyone discourage you by telling you that you can’t. Study hard, the dedication and effort you put in now will have a profound impact on your life later on.”

“Having a Bret Harte graduate go on to such great accomplishments is an honor for our small community,” expressed Superintendent Scott Nanik. “All of our students are capable of great things and this is just one example of that.”