Remains of Soldier Killed During the Korean War to be Buried in McLaughlin, South Dakota

McLaughlin, South Dakota…The remains of a Soldier killed during the Korean War will be interred Sept. 30, at All Nations Veteran’s Cemetery. Graveside services for Army Pfc. Melvin J. Little Bear will be performed by Kesling Funeral Homes, Mobridge, preceding the interment. 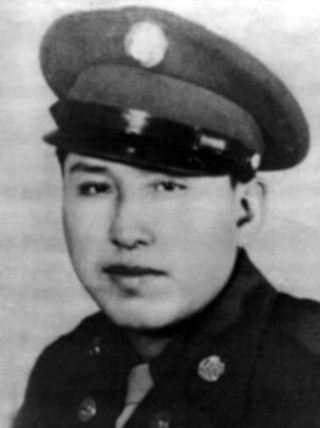 A native of Standing Rock, Little Bear was a member of A Battery, 15th Field Artillery Battalion, 2nd Infantry Division. He was reported missing in action Feb. 13, 1951, after his unit was attacked by the Chinese People’s Volunteer Forces in Changbong-ni, South Korea. Little Bear was captured and held a prisoner of war at POW Camp No. 1 in Changsong, North Korea. According to repatriated POW reports and information from Chinese and North Korean forces, he died in captivity on or about July 21, 1951, at age 21.

Remains from POW Camp No. 1were returned to United Nations Command in the fall of 1954 – as part of Operation Glory – but could not be identified. Subsequently, the remains, designated X-14251 Operation GLORY, were buried Feb. 16, 1956, at the National Memorial Cemetery of the Pacific, also known as the Punchbowl, in Honolulu, Hawaii.

Decades later, in November 2019, during Phase 2 of the Defense POW/MIA Accounting Agency’s Korean War Disinterment Project, X-14251 was disinterred from the Punchbowl as part of the planned exhumation of 23 Operation GLORY burials originating from the Changsong area. The remains were transferred to the DPAA Laboratory at Joint Base Pearl Harbor-Hickam, Hawaii, for analysis.

Little Bear was accounted for by the Defense POW/MIA Accounting Agency July 13, 2022, after his remains were identified using circumstantial evidence as well as dental, anthropological and mitochondrial DNA analysis.

His name is recorded on the Courts of the Missing at the Punchbowl, along with the others still missing from the Korean War. A rosette will be placed next to his name to indicate he has been accounted for.

More than 7,500 Americans remain unaccounted for from the Korean War.

“For additional information about Pfc. Little Bear, go to: https://www.dpaa.mil/News-Stories/News-Releases/PressReleaseArticleView/Article/3093084/soldier-accounted-for-from-korean-war-little-bear-m/

To learn more about the Department of Defense’s mission to account for Americans who went missing while serving our country, visit the DPAA website at http://www.dpaa.mil, 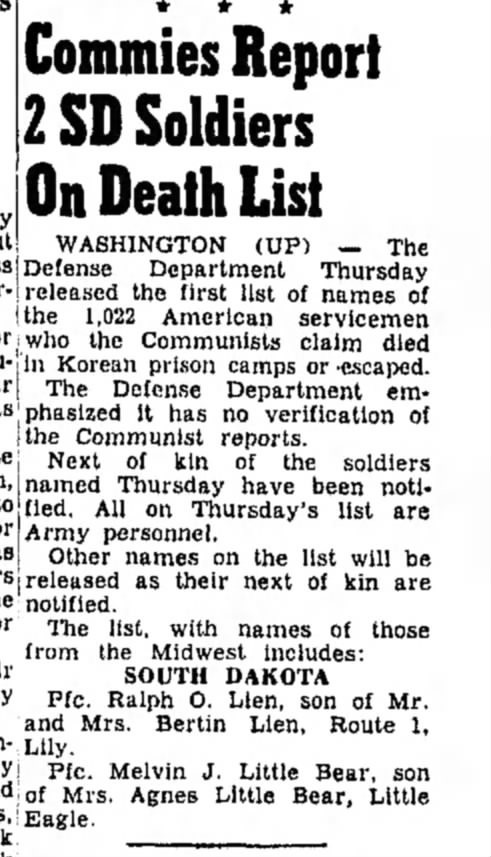 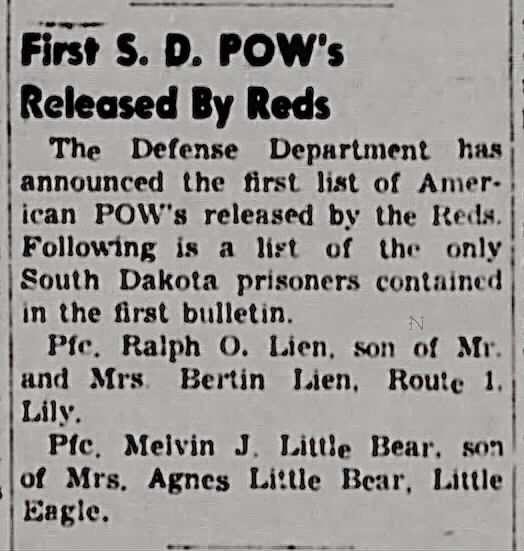 Remains of Soldier Killed During the Korean War to be Buried in McLaughlin, South Dakota added by admin on September 20, 2022 10:26 am –
View all posts by admin →